Nashville was never supposed to be my hometown. I was never supposed to be a Southerner.
I resisted the city, the region, its people, its music. They could keep their country music. I at least had Cat
Stevens and his insistence of a wild, wild world. I took pride in refusing to say “y’all” for all of high
school. I was that serious about rejecting this place. Refusing to be a part of it. Because how could I
betray my Canadian birth and identity for a place like Tennessee?

That first year in Nashville was the first time I had ever heard the term, “Shariah Law.” A friend told me
about it and what it had to do with the protests happening near the federal building downtown and at the
legislative plaza, across from the state capitol. There was a bill introduced in the Tennessee State
legislature wanting to ban Shariah Law in Tennessee, and my 15 year-old self was very confused about
what this “law” meant. And more importantly, about what it had to do with Muslims.

When I asked my mom what “shariah” meant, she answered that it refers to the rules we’re asked to live
by as Muslims and the particulars of our daily lives. I asked myself then, probably for the first time, and
certainly not for the last: why does our existence feel so threatening to them?

“Them” was in reference to a particular group of people: white, Southern, Christian hicks—hicks because
that’s all they were in my mind. If they were going to reduce me, I would reduce them.

The Anti-Shariah Law bill was the first thing I ever protested. And through high school and college,
Tennessee and America would give me a lot to protest. By the end of college, I was tired. Tired of dumb
kids in high school calling me Osama bin Laden’s wife. Tired of tensing up around old white guys in
pick-up trucks at the gas station. Tired of old white ladies in grocery store aisles giving me stares, which
I’d return with a smile, sugary like sweet tea.

After 8 years of high school and college, my roots in Tennessee had grown deep. Almost as deep as the
roots of the magnolias that canopied the former plantation, home to my Christian alma mater. I’d even
started saying “y’all” and occasionally dipped into a lite southern drawl, which must have crept into my
speech when I wasn’t listening.

When senior year of college rolled around, I was ready to plant myself elsewhere. “Anywhere but here”
was my mantra. And since I had met other American Muslims in other places, that’s where I wanted to be.
Other places like the Northeastern US, where the Yankees live, and as far away from Dixie as possible.
Washington D.C., Boston, New York. That’s where all the Muslims who were my speed would actually
be. That’s where I would find community. So, I told myself.

And I left, and a couple years later, I ended up in Massachusetts for grad school.

And it wasn’t until I moved to Boston that I realized just how Southern I had become. People in grocery
stores looked at me funny if I smiled. In fact, smiles were sparse. Reserved for people you knew.
Basically, I experienced culture shock in America, and that was something I wasn’t ready for.
As for the Muslims, well, they were very different from the kind I grew up around. They were like anyone
else from the North: quick with their words, sharply opinionated, and would flash me a look of pity when
I told them I was from Tennessee.

And what bothered me more was the air of coastal elitism.

Their communities were older, more robust.

That’s what they had.

And when I told folks that Nashville had a lot of Muslims. They were surprised, but in an unimpressed
way.

“Oh wow,” was usually the response I got.

But we didn’t have any name-brand Imams, so in their view, Nashville wouldn’t have much to offer the
rest of Muslim America, except for headlines about instances of islamophobia.

I was annoyed. I was disappointed. And I was defensive. I found myself often defending the South as a
diverse place—which it is—and in that instinct to defend, I realized how deep my roots really ran.

How much my seemingly unimpressive Muslim community had given me. Late night hang-outs at the
Sonic drive-in after Ramadan taraweeh prayers, Eid picnics complete with dessert contests, sack races,
and a kids v. adults tug of war. Suhoor at iHop or the Waffle House, youth group mountain retreats and
community potlucks and brunches.

Maybe Nashville didn’t give me mega-mosques and fancy seminaries and eminent Imams, but it gave me
aunties and uncles from all sorts of backgrounds, Muslim and non-Muslim.

And that’s worth something. Right?

If you come to Nashville, one of the places folks will tell you to visit besides Broadway and Nashville’s
historic music venues is this little half-mile stretch of restaurants and shops on12th Avenue South. It’s
become a hip little spot over the past decade.

In the summer, you can smell waffle cones being freshly pressed and rolled at Jeni’s ice cream. In the fall,
you’ll see the small green clearing transformed into a pumpkin patch, with pumpkins spilling out of a
vintage Ford pick-up. Hints of coffee drifting out of its coffee shops warm the cold winter air. And year
round, you can see a red, white, and blue mural of the Tennessee tri-star flag with the phrase “I Believe in
Nashville” emblazoned on the side of a brick building.

I don’t know if I believed in Nashville then, but I spent a lot of time in college migrating between these
coffee shops and restaurants. What folks won’t tell you is that smackdab in the middle of 12 south is the
Islamic Center of Nashville. In the 70s, Cat Stevens had recently converted to Islam and donated money
to the Nashville Muslim community so that they could have a home here in the city. Decades later as a
college student there, I would make a home for myself there, attending jumu’aa prayers on Fridays,
walking over from Frothy Monkey or Portland Brew for prayers during study breaks, and catching up
with aunties and uncles I wouldn’t see otherwise.

It was nice, having a little refuge. I grew fond of seventies wood paneling along the lower half of the
prayer room walls, and the slightly gauche lime green color of the paint. And I liked that ICN isn’t a
particularly large or grand mosque. It quietly blended right in with all the other historic buildings on the
street. It’s part of the neighborhood. The only thing that really stood out was the star and crescent
protruding from the top of its modest, pyramid shaped dome.

My all-time favorite event at ICN was the Annual Diversity Brunch.

Every year around mid-April, ICN opened its doors to the Nashville community for a chance to sample a
spread of culture and their cuisines. The whole prayer room of the mosque transformed into an exhibition
of booths displaying every represented country’s culture, and outside in the parking lot was a
corresponding buffet, with aunties and uncles serving visitors the homemade dishes they prepared: my
mom’s Libyan couscous, Egyptian koshary, Somali sambusas, savory cheese and mince meat pastries
from the resident Palestinians, and goat biryani from our Pakistani aunties. All at once, your nose was hit
with the sweet and spicy, warm and bready smells of a home kitchen.

I remember the year my mom and I signed up to set up our Libya booth, and while she served folks
couscous outside, my sister and I chatted with folks inside. The 2016 presidential election was well
underway, but it was early enough for Donald Trump to still be a joke.

Visitors at the brunch included neighborhood locals, politicians, community organizers, and folks from
churches in the neighboring suburbs. I remembered thinking I had never seen so many white people in the
mosque before.

That afternoon, there was a bit of a lull, and people meandered about the prayer hall. An old white dude
with a Santa Claus beard, flannel shirt, and trucker hat walked up to our little booth, and in my mind, he
fit every criteria of that Southern white hick.

“So, Libya, huh?” he asked.
“Yep, that’s where my family’s from!” I said in my white people voice to muddle any tension that he
might otherwise pick up on.

Then he asked me what city, and I reluctantly said Benghazi. I wasn’t keen on what might come next, and
his poker face didn’t help much.

“You know, I been to Benghazi!” he said in a thick drawl, “Yeah, back in the 60’s. One of the safest and
most hospitable places in the world I’d ever visited. Loved the people. Shame what’s happened to it now.
Hope things get better for them there. But it’s nice to see a little slice of it here.” I smiled and nodded,
offered some pleasantries in return, and gave him some Libyan orange and anise seed cookies we had set
out for folks to sample. He thanked me for my time and for the cookies, and then moved on to the booth
next to us.

That evening I thought about that old white guy.

How I had tensed up as he came towards the booth, how reluctant I had been with him versus the other
more obviously well-meaning liberals who’d come up to me before him. And I knew I wasn’t wrong to
feel uneasy, past experiences had set me up for that kind of reaction. But as much as I hate to admit it, that
old white guy moved me. Hearing him speak so fondly of my motherland and his gratitude for Libya and
Muslims, it caught me off guard.

And then it softened my heart towards him. Because as much as the racists were a part of my life in
Nashville, this old man and others like him were, too.

I didn’t choose Nashville to be my hometown.

As a place to come of age as a young person and as a Muslim.

But I did choose to come back.

To come back to the wood-paneled walls of ICN, its stacks of Qurans and community boards, its carpets
smelling sweetly of washed feet and musk, upon which I’ve prostrated countless times.

To the cicadas singing in the hot, sticky summer, which one cooled with a trendy cold brew or ice cream.

To the comfort of slow and lasting smiles on both familiar and strange faces.

Wherever I end up in Cat Steven’s wild, wild world, and whatever city and Muslim community I’ll call
home next, I believe that no other place can give me what Nashville has given me: a real, weird,
complicated, but all the more embracing hometown. A hometown that, whether I like it or not, has shaped
my faith and my Americanness in fundamental ways.

And isn’t that what hometowns do to us all? 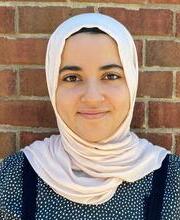 Khadija is a second-year Master of Theological Studies student at Harvard Divinity School focusing on Islamic Studies. Specifically, she is interested in Islamic philosophy and theology and the development of American Islam. She graduated from Belmont University in 2018 with a B.A. in Philosophy and German, after which she spent a year in Germany as an English Teaching Assistant through the Fulbright Program. Having grown up in the South and attended a Christian university, Khadija spent her undergraduate years organizing an annual World Religions Symposium in which she invited representatives of Nashville’s Muslim, Jewish, Hindu, Buddhist, and Baha’i communities to educate her fellow classmates on their respective faiths.