Religion in the Digital Age seeks to better understand religion in American public life through collaboration with members of local communities representing diverse traditions, histories, and practices. Attending to sounds, sights, and spaces, as well as to teachings and texts, our research team works to build a robust multisensory inventory of religion as it is lived in the complex realities of modern life.

The LRDA initiative is directed by Dr. Rachel McBride Lindsey and Dr. Pauline Lee, both faculty in the Department of Theological Studies at Saint Louis University. The initiative was awarded a three-year funding cycle through the Henry Luce Foundation’s Advancing Public Scholarship on Religion and Theology grant.

We invite sustained conversation across theology and the multidisciplinary study of religion to develop research models that scrutinize the translation of these local inventories into digital products. The project convenes two events each year, supports research and teaching at the intersection of lived religion and digital cultues, and is working with the Walter J. Ong, S.J. Center for Digital Humanities to build a publically accessible, interactive database of religious life and practice. 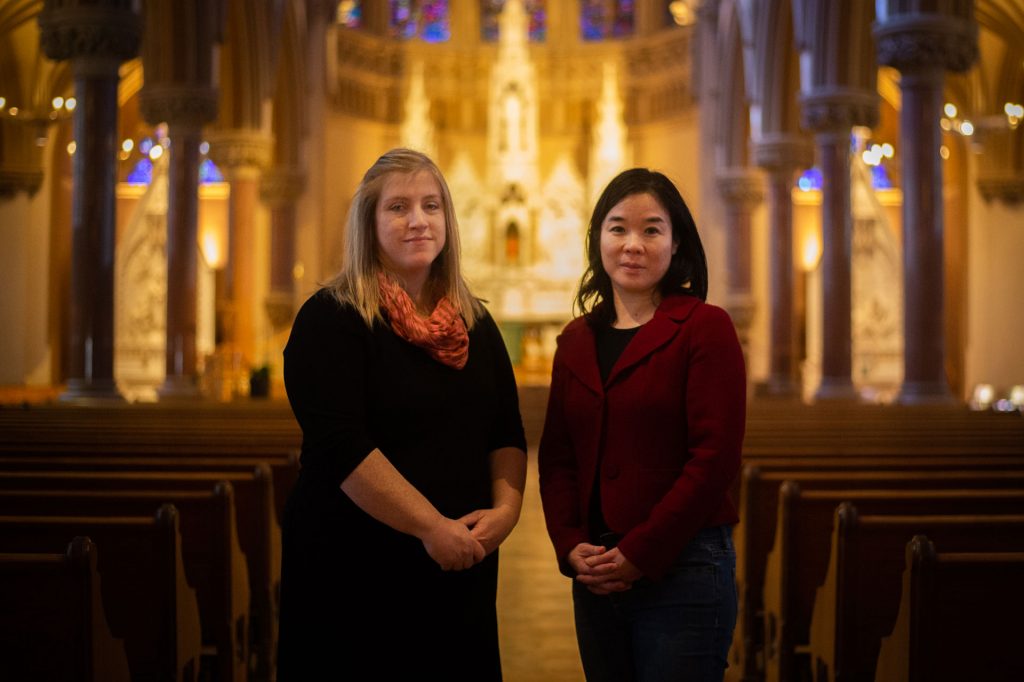 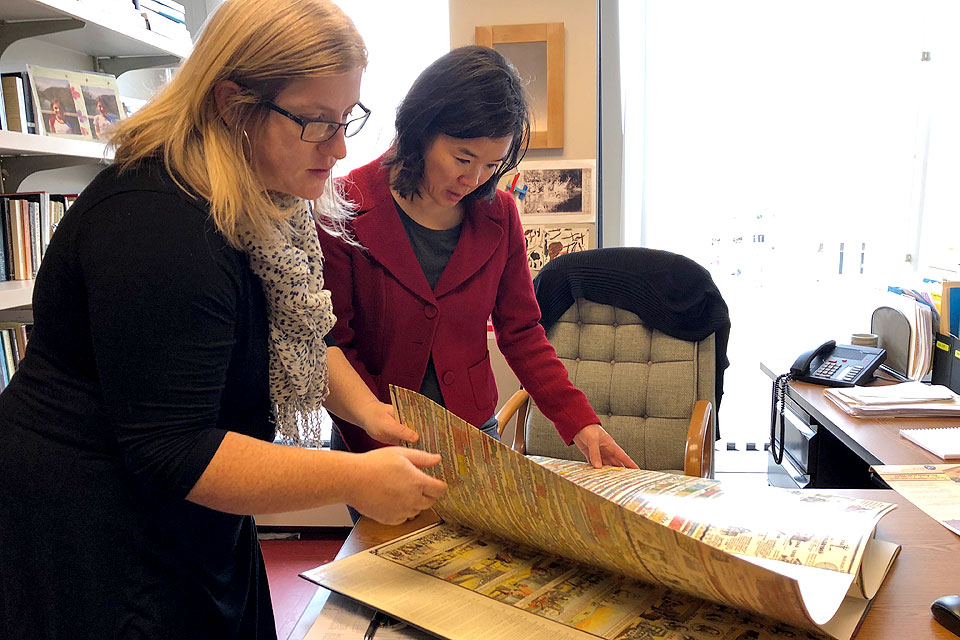 Our conferences, forums, exhibits, and public events seek topical organization. In the 2018-2019 academic year, we focused on “Mapping Religion” in attempt to develop new methods of imaging cities and spaces across lived experiences and digital life. The focus of 2019-2020 is “Performing Religion,” wherein we consider the practiced, embodied side of being religious. And the thematic concentration of 2020-2021 will be “Religion, Migration, and Diaspora,” which aims to highlight the impact of displacement on religious life.

Rachel McBride Lindsey is assistant professor of American religion and culture in the Department of Theological Studies at Saint Louis University. She received her B.A. from Missouri State University and her Ph.D. from Princeton University. Her research and teaching focus on religion in the United States with primary expertise in visual and material cultures of religion, race, and nation. Her first book, A Communion of Shadows: Religion and Photography in Nineteenth-Century America, is the first monograph to investigate the influence of commonplace photographs in American religion in the first decades of the medium. According to one early review, the book’s “overall argument” and “theoretical rigor” allow my “analysis of neglected photographic media and their conditioned uses to … illuminate new paths in the study of religion, media, and history.” Her scholarship has been published in refereed journals and collections, including American Quarterly, Journal of Africana Religions, Journal of Southern Religion, the Oxford Handbook of Religion and Race in American History, Religion and Politics, and The Immanent Frame. Her recent research explores religion and race as grammars of American citizenship in the twentieth century through case studies in documentary photography, photojournalism, and other forms of media that orchestrate material objects as registers of the sacred, variously defined, into their visual claims. She is currently working on a cultural history of religion in St. Louis.

Pauline Lee is an associate professor of Chinese Religions and Cultures in the department of Theological Studies. She received her A.B. from Stanford University, her M.T.S. from Harvard Divinity School, and her Ph.D. from Stanford University. She teaches East Asian religions and philosophy including courses in comparative ethics, Chinese civilization, world religions, and children’s studies, and previously has taught at Santa Clara University and Washington University. Her first monograph, Li Zhi, Confucianism, and the Virtue of Desire (SUNY Press, 2012), examines the 16th century thinker Li Zhi 李贄 and his views on the role of self-expression and desire in a good life. With Haun Saussy and Rivi Handler-Spitz she has co-edited A Book to Burn and A Book to Keep (Hidden)  (Columbia UP, 2016), the first book-length English language translation of Li Zhi’s major writings. Her current interests include the Jesuits in China and lived religions in the digital age. Professor Lee’s in-progress monograph, provisionally entitled Play in China: The Trifling, the Wicked, and the Sacred, examines changing views of play in China from ca. 200-1800 CE through a study of Chinese religious and philosophical classics and the rich but too often neglected tradition of commentaries on these works.

Adam Park is a historian and ethnographer of American culture with specialization in religion, gender, race, and violence. Receiving his Ph.D. from Florida State University in 2017, Adam now teaches in the departments of American Studies and Theological Studies at Saint Louis University. His current book project, Savage Saints: Muscular Christianity, Human Nature, and Fighting in America, 1858-2020, details the formation of aggressive, masculine, religious subjects over the past century. Answering questions about the cultural sources of violent feelings and behaviors is Adam’s recent article in Religion & American Culture, “‘Fighting Spirit’: WWI and the YMCA’s Allied Boxing Program.” Overall, his work shows that Americans have long-since been emboldened by the “virtue” of agression, and have therefore looked to physically belligerent exchanges to formulate stories about themselves, myths about their past, about a God-given human nature that is simultaneously violent and good. Alongside this research and teaching, Adam will be the Digital Stories editor for Lived Religion in the Digital Age beginning in Fall 2019.

Samantha Arten received her Ph.D in musicology at Duke University (2018). In addition to this position as Project Administrator, she is a faculty affiliate with the Center for Medieval and Renaissance Studies at Saint Louis University and the Administrative Manager of the Women’s HOPE Chorale of St. Louis. Her musicological research is centered in the music of the English Reformation, and in addition to sixteenth-century congregational hymnody, her other interests include Reformation theology, print culture and book history, early music performance practice, and contemporary sacred vocal music. Her work can be found in Early Music and in The Oxford Encyclopedia of the Bible and the Arts.

A scholar of constructive theology, Deepan Rajaratnam studies the intersection of ecclesiology and pneumatology with a particular interest in the laity. Building on the foundation laid by Yves Congar and incorporating ideas from Ormand Rush, Rajaratnam’s work focuses on the sensus fidelium in relation to local church. Employing a framework of communion ecclesiology and ecclesial synodality, Rajaratnam engages ethnography to further assess the sensus fidelium within local churches. Rajaratnam is currently a PhD Candidate at Saint Louis University where he was selected as the 2019-2020 Religion & Public Life Fellow. Previously, he studied at Boston College where he earned a Master of Theological Studies (M.T.S.).

Patrick is the IT Architect for the Walter J. Ong, S.J., Center for Digital Humanities at Saint Louis University. Notable contributions include IIIF community (founding membership, Technical Review Committee representative), design and code for the Mirador IIIF Viewer software (and Rerum Inbox Linked Data Notification Plugin), TPEN transcription tool, and the Rerum entity annotation ecosystem. Patrick has consulted for broad audiences, including the Botanical Heritage Library and Federal Reserve, on considering the benefits of IIIF implementation and annotation standards. Patrick has collaborated with fellow technicians and scholars on digital tool interface design and the power of annotation to encode the ambiguity of academic conversation around even non-digital and undigitized resources.

Bryan is a Full Stack Developer for the Walter J. Ong, S.J., Center for Digital Humanities at Saint Louis University. Prominent contributions include code for image tools in the Mirador viewer, TPEN 2.8 transcription tool, Italian Paleography and French Paleography too for Newberry Paleography, a Spectral (Web)RTI Plugin for ImageJ, the RERUM API and the RERUM Back End systems. Bryan has focused on intersecting scholarly and technical resources and personnel in ways that advance and enrich software initiatives for researchers and audiences of all grades.